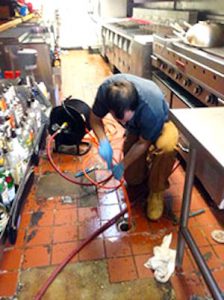 Hello to our Canadian affiliates, if you are here because of the email blast we appreciate you coming here and reading this. We publish fun posts a few times a month about random things going on in our communities and within our affiliate ministries. One of our affiliate Churches in Toronto, Canada has experienced extreme clogging in the drains of their service kitchen. The church is equipped with an industrial kitchen to prepare and serve food to the congregation during service hours. The kitchen is also used to feed homeless in Toronto, Ottawa, and Scarborough. There are quarterly events where the homeless from shelters in Ottawa and Scarborough are bussed in and fed. The size of the facility is enough to feed 100’s of people when everything is working. This week there was a church function and they received complaints of some rancid odors. Upon further investigation it became clear that there was a serious backup in the kitchen drains. It’s an industrial kitchen and it also has floor drains, these were backed up also, creating small puddles of dirty water around the floor. Most of the men and women working the kitchen during ministry hours are older volunteers that have no business trying to unclog drains, and the standing water is an extreme hazard for our elderly brothers and sisters.

They were able to sweep the standing water out the back door, but the odor continued to loom and soon some of our worshiping flock felt ill. They shortened worship hours and everyone went home early. One of our church members was a plumber there in Toronto and was able to bring in a snake. The floor drains were backing up onto the floor, while the sink drains were clogged and filling the sinks with dirty water. Both drains needed to be unclogged and serviced but it was more work then our friend was able to take on that day. They then reached out to a guy locally that fixes clogged drains in Toronto, but we didn’t get an answer when they called. They then tried a professional handy man service in Toronto, and they really didn’t have the plumbing tools needed to unclog this type of drain. Eventually they ended up going to a local hardware store in Toronto and renting an industrial style snake. It was motorized and mounted on a rolling cart that made it easy to wheel in and operate. I’m not sure how far in they had to go, but they reached the blockage in the drain pipe and everything immediately drained at the same time. The snake was able to wrap up the clog and pull it out, from what I hear it was a pretty disgusting mix of hair, grease, mop strings, food, and debris. After unclogging such a rats nest of debris, it became apparent that they needed to do a better job of sweeping and mopping before washing food and dirt down into the floor drains. It’s easy to grab the kitchen hose and just rinse everything into the drain, but that created plumbing issues like the one they experienced in Toronto. Lessons learned, for any of our affiliate

Church members that are still reading this and have kitchen operations, sweeping the floors thoroughly before rinsing and mopping is highly suggested. Remember to always keep your kitchens clean and sanitary, the food inspector can show up without notice at anytime and backed up plumbing is a big red flag. Unsanitary waters backing up into sink drains that are used to prepare food could result in a penalty or a fine. Even the dishwashing pit needs to drain properly and have the ability to rinse, wash, and sanitize dish ware during operation hours. Keeping your kitchens clean and functioning properly will keep you from violating any local health codes in your city. If you would like more information about contacting your local health inspector, just reply to the email we sent out that brought you here. Thanks again to all our loyal members for the continued support, we will see you all soon at the convention in 2019. Bye-Bye for now.